The America Ground was the name given to a triangular area roughly bordered by Robertson Street, Carlisle Parade, the Queens Hotel and Claremont.[1] The western boundary of Hastings at the time of the squatters was largely considered to be the Priory Bridge, anything west of that was 'foreign'.[2]

Initially, it was settled by the itinerant builders who were employed in the large scale construction works taking place around the town[3]. Immediately prior to being cleared in 1850, the area was home to a number of squatters and consisted largely of Ropewalks. Post 1850, the land was transferred to the Crown, becoming the property of the Chief Commissioner for Woods and Forests, remaining in Crown possession to the current day. 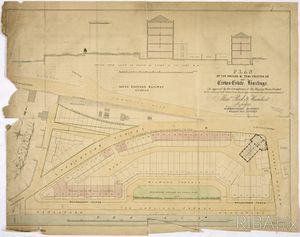 Prior to becoming closed up by the accumulation of shingle after the great storm of 1287, the area was once part of the river mouth of the Priory Stream. It has been speculated that this was once the best natural harbour on the south coast.[4]. The stream used to be navigable up to approximately the location of Hole Farm[5]. The land was part of the property of the Augustinian Priory of the Holy Trinity, and the Priory Farm more recently. The Priory Stream still runs under the deep layer of shingle (albeit in a culvert). During excavations conducted in the Town Centre during the demolition of some buildings for road improvement works, remnants of what were possibly either the Priory Bridge or an ancient sluice gate were found. 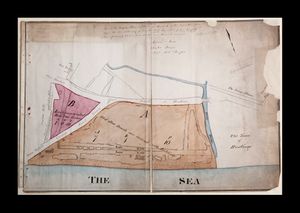 The rapid developments taking place around Pelham Crescent by the architect Joseph Kaye for the Earl of Chichester (commencing in 1820) and James Burton`s new town, St. Leonards, (commencing in 1828) meant that a large number of builders and other trades for the necessary construction work migrated into Hastings[3]. It was reported that they; “took possession without leave, licence, or interference, and built houses, shanties, warehouses, and other erections, for which they paid no rent or consideration - a ‘No Mans Land` and independent of any law or order and, who when challenged hoisted the American Flag, very much a symbol of independence at that time".[6]

At the peak of this occupation, almost 200 buildings with over 1000 inhabitants took over a space of nearly 8 acres on the foreshore, with the earliest known occupants of the America Ground recorded as being Thomas Page and John Prior in 1806. The two men were listed as resident in the remains of the sailing Brig Polymina, converted into two dwellings[6].

As the population grew, various trades appeared in the locality including a carpenter, a gardener and a miller together with Lodging houses, as well as limekilns, stonemasons, a sawing house, a tallow factory and a butcher with slaughter houses (one being recorded by John Banks as being in the centre of Robertson Street[7]) and piggeries. It was even recorded that a gin palace, the Black Horse run by Daniel Thomas was established here[8], a beer-house called the Blacksmiths Arms run by William Woolgar[3], and a small school, the forerunner of Hastings Grammar School.

A large number of the properties were found by a survey of the area in 1829 to be either in the ownership of Mr. Thomas James Breeds, Mr. Thomas Breeds, and Mr. Mark Boykett Breeds, or associated with them.[9]

Perception of the America Ground[edit]

In general the occupants of the America Ground were considered to be little more than smugglers, thieves and vagabonds. Many of the shacks consisted of half-boats (vessels that had been destroyed by sawing in half at the Condemned Hole) up-ended.[10][11]

Sheila Kaye-Smith described the area as having been “free to any beggars, gypsies or other undesirables ... a mock city of shacks, huts and tents.”[12][6] Barry Funnell however represents that in his book, ‘The America Ground’ (ESCC Library), is that of a diverse, industrious, self-contained community. J. Manwaring Baines in Historic Hastings gives the following exchange between the, then Pierwarden, Charles Picknell and counsel during the hearing on the area;[13]
"Witness: You were not thought respectable then, if you were not a smuggler"
"Counsel: That was true of other places besides America?"
"Witness: Oh, yes, they were all smugglers, Parsons and all."
"Vice Chancellor: Do you mean to say that the Parsons also went in for?"
"Witness: Oh, yes, they used to take a keg for Christmas sometimes, your Honour".

At some point in the early 1800s, bailiffs were sent into the area to search for and apprehend suspected felons. The occupiers of the ground rioted in protest and chased the officials back over the Priory Bridge. The inhabitants then raised the American flag, the Stars and Stripes, as a symbol of their independence, which they maintained to the end of their occupation of the land, aping events that had occurred during the American Revolution.[14]

In 1821, Abraham Purshouse Driver and Edward Driver, drew a plan of the area which is held at The Keep. The catalogue entry contains the following description[15];
"A Plan of the land between Cuckoo Hill and The priory on the west and the south end of All Saints Street on the east, that shown by 4 below and to the south of Castle Street showing buildings and other structures in detail; shows Rock Fair Green, The Priory Houses, The Castle Hotel (Thomas Farncombe), The New Parade, The Parade and The Battery; George Street, West Street, Hill Street, High Street, East Bourne Street, All Saints Street, Courthouse Street, Three Post Lane, Winders Lane, John Street, South Parade, Market House and the Fishmarket shown in outline, though apparently with great accuracy; Pelham Terrace and Pelham Place sketched in in pencil"[15]

As a result of many legal proceedings being commenced by the squatters with regards to what were their percieved boundaries reaching higher courts than the local Court, the Government became aware of the situation with regards to the America Ground and resolved to settle matters once and for all.[16] This resulted in, on the 5th November 1827, an inquisition being held at the George Hotel, Battle. into the America Ground to determine ownership. In addition to the squatters of the land, the Borough of Hastings, and the Crown, the adjacent landowners (the Cornwallis and Eversfield Estates) held themselves to be entitled to the land.[17]

After the Battle Commission decreed that the land was the property of the Crown, notices were served on the occupants in May 1828 to prove their claims. Of course, proving of the claims was impossible, but a number of seven year long[9] leases were granted to those who had buildings on the land.[17][18]. In addition, the detailed plan of the land between Cuckoo Hill and The Priory was annotated to reflect leases[15].

Cousins gives names of a number of lessees of the land in his book[19] as follows;

The following names appear in St. Leonardensis's column as having moved from the America Ground to St Leonards[20];

Brett goes further and some of the properties to which they removed[21][22];

There is also mention of 'The Old House at Home' having been removed to Queens Road in Brett's Manuscript History of St Leonards and Hastings, Vol. 2, Chapt XV

The ‘Americans’ remained fiercely independent until almost the very end. During 1832 they marched to the Priory Meadow for a civic banquet in honour of the Reform Bill being passed, carrying their flag, which by now also bore the Union Flag and the Arms of Hastings. The flag was presented to the Borough as a gesture of reconciliation.[14][23]

On the 13th of November 1834, the Woods and Forests Commissioners served notice that all buildings remaining on the ground after Michaelmas the following year, would be forfeit to the Crown.[17]

A large number of the inhabitants evicted moved into St Leonards, some even going so far as to remove their houses piece-by-piece and rebuild them in Gensing Road, Norman Road, Shepherd Street, North Street and London Road to name a few locations; in total, some twenty eight buildings were eventually re-located.[17][14][22]. It is additionally recorded that a Mr. and Mrs. Palmer relocated to St Mary's Terrace[24], and some of the early properties on today's White Rock had removed from the America Ground[25]

With the high ground along the line of Cambridge Road being claimed by Lord Cornwallis as being the boundary of his land, the triangular portion of vacated ground now came under Crown ownership.[26]

The 'America Ground' then remained unused for some 15 years[17] other than the Rock Fair (July 26-27th) and a few cricket matches becoming known as the `Derelict’ or `Waste Lands`.[6]

A real estate developer called Patrick Francis Robertson leased the crown lands for 99 years at a rate of £500 per year. His name was later given to Robertson Street. Plans were drawn up by an architectural partnership, Reeks Humbert around 1850/1851 and construction of the aforementioned Robertson Street, Carlisle Parade and Robertson Terrace followed rapidly, utilising bricks that had been produced locally at brickfields near or on the town centre side of Alexandra Park[27]; the brick-production commencing in April of that year[28], the first occupant moving in some six months later.[6] As an aside, the name Carlisle refers to Lord Carlisle, who was at the time Chief Commissioner of Woods and Forests.[29]

On the 4th of July 1999, a tradition started where the American flag would be raised accompanied by a reading of the American Declaration of Independence[30]. There have been minimal changes to the architecture of the area over the past 100 years, the only real development being infilling of a 'gap' site between Cambridge Road and Robertson Street

This category has only the following subcategory.

The following 32 pages are in this category, out of 32 total.