Robertson Street Congregational Church (since 1972, the Robertson Street United Reformed Church) was designed by Henry Ward (1854-1927) who designed many of the key buildings in the town, not least the Town Hall and built in 1885 on the site of an earlier church which had been constructed in 1857.[1] The church is situated between Robertson Street and Cambridge Road and has a split-level arrangement with part of the gallery occupying a flying freehold over the alleyway adjacent to the entrance on Robertson Street. 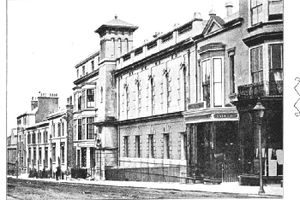 The church was founded by Daniel Smith in 1856 who carried out much evangelical work around the town.[2]This was in the original gothic styled building on the site.

The Rev. C. New, one of the most important figures in Hastings' Congregationalist community at the time, was instrumental in getting the new church funded and built [3]after the congregation had out-grown the original building and extensive repairs were required in any case. With tenders for the construction ranged from £6526 to £8240, the chosen contractor was John Howell with a bid of £7090[4]. In order to permit the expansion, the property next-door to the church had also been purchased.

Whilst the congregation had no church to worship in, services were held at various locations throughout the town, including The Gaiety Theatre and Hastings Pier pavilion.[5]

The Memorial stone was laid on the 11th of September 1884 at 3:30, with a large crowd of people, mainly members of the congregation and worthies such as the Mayor, Alderman Thorpe and a number of Pastors and Ministers of surrounding churches. When the time came to lay the stone, one of the leading Congregationalists of the time, Mr Spicer was presented with a silver trowel to lay the stone.[4] He then declared "In the name of the Father, and of the Son, and of the Holy Ghost, I declare this stone well and truly laid".[4].

The stone was laid on the Cambridge Road side of the building and reads "This stone was laid by James Spicer Esq. J.P., of Woodford on September 11 1884. Rev. Charles New, Minister. H. Ward Architect. John Howell & Son, builders.[4]

The new building was dedicated on the 7th of October 1885 in a service that was presided over by the Rev. C. New with a large number of both Congregationalist and local dignitaries present.[5]

The building is constructed of coursed ragstone with ashlar and probably terracotta dressings. The doors are made of Oak on both the Cambridge Road and Robertson Street aspects. The Robertson Street entrance has steps carved out of York Stone.[6] A monumental staircase extends up from the Robertson Street entrance after passing a hall which is currently used as a cafeteria. A rear stair and stairs with wrought iron balustrades lead into the horseshoe shaped gallery which repeats the curved pews with under-pew heating.[1] In total there was seating for 1100 people.[2]

It was planned that the basement (which was subdivided into a deacon's vestry, the minister's vestry, the choir vestry, a general vestry, a large hall and lavatories[5]) could be utilised by the Young Mens Christian Association (although the YMCA decided on 12 Claremont in the end[7]) in addition to providing classrooms and meeting rooms.[6]

A boiler room was built into the basement during 1962.[8]

The galleries, pews, ceiling and roof were made out of pitch pine, with the walls being finished utilising Parian cement (a fast drying cement with borax added to the mix).[6] At the time of dedication, the church was the only non-conformist place of worship lit by electricity.[5]

The church features a Foster & Andrews (later overhauled by Morgan and Smith) two console organ with highly ornamented pipes mounted unusally above the altar behind the minister[6]. Some pipes are currently stored laying down due to deterioration in the mountings and other stops are believed to be inoperable.

Stops at time of building[5][edit] 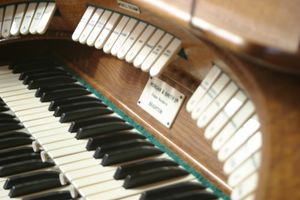 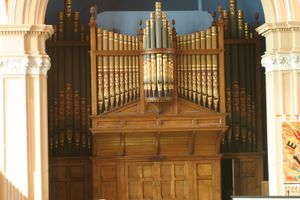 The church purchased land in Priory Street during 1876 to construct the Robertson Street Church Institute. In addition to this the church raised many churches in the villages surrounding Hastings.[2]

A mission hall was opened at Red Lake on the 23 September 1903, [9] preaching of the gospel in this area having previously been carried out in the open air. Whilst a hall was hired in winter, the young men of the Robertson Street congregation had previously had brickbats thrown at them, at one point breaking a harmonium beyond repair.

A WW1 war memorial plaque is in the north-east corner of the church giving the names of those who made the ultimate sacrifice during WW1 not only from this particular church, but the associated branch churches and associations. A list of names, together with links to service records where applicable will appear here

In 1943, total number of church-members had fallen to 238[2]. At services conducted by the Rev. A. E. Gould, in December 1944 there were only 65 attending the morning service and 42 the evening.[2]. The Reverend accepted a call to the ministry and was inducted in March 1945[2]. Over the course of just under ten years, he had attracted nearly 400 new members which was reflected in the church roll exceeding 400 by 1955[2].

During the course of the Rev. Gould's ministry, the church raised £1000 to install replacement electric lighting in 1948, marketing events in advertisements as "The church with a great past invites you to help equip it for a greater future".[10]

He was succeeded in 1955 by the Revd Charles A Haig. In the years that followed, the church became a centre of evangelism, with particular credit being given to the quality of its youth and children’s work, under the guidance of Kay Mozely.[2]

In 1978, the Rev. Brian Bowyer came to the church and was able to see the church through difficult days when major faults were discovered in the roof. For a long while, the sanctuary was closed, with the congregation worshipping in the church hall below. A mammoth fundraising effort saw the roof repaired in time for a wedding within the church family to take place in the sanctuary as planned.[2]

A ministry team was then developed for the area and different ministries developed. However, the local churches reflected the national trend of declining numbers, and new patterns of providing ministry for the area were constantly being sought.[2]

In the 1987 Storm, the building suffered further damage, particularly to the roof.[1]

The membership of Robertson Street fell from 42 in January 2010 to 28 at the time of closure in December 2012, mainly as a result of deaths.From January 2012, the congregation began exploring its future, ahead of the Local Mission & Ministry Review (LMMR) process due to take place later in the year. Given that the prospects of receiving a minister were slim (due to demands on URC ministry at this time), that there were major problems with the building which would be expensive to make good, and that there were three other URCs in the town as well as churches of other denominations – all of whom would welcome new faces, the congregation began to question whether the best move might well be to disperse as a fellowship and enrich the lives of other churches through the injection of new members.[2]

The path towards closure was first chosen on 21 September 2012 and confirmed on 30 November of the same year. In its time, Robertson Street URC was an engine for evangelism; it hosted meetings of the local committee of the London Missionary Society as well as the Hastings Council of Churches.[2] Robertson Street URC closed on 30 December 2012. 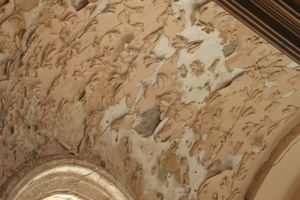 Since 2014, the building has been owned by His Place Church under the Reverend Chris Sears,[11] His Place having outgrown its existing premises at Duke Road which had been its base for 19 years. £35,000 was spent on roof repairs and fund-raising continues to permit repair of many parts of the building. Current usages alongside the church include a cafe, a theatre, a 'safe space', mental health support groups and many other community groups.[1]

The windows and stonework, together with ironwork require repairs costing in excess of £750,000 with additional repairs needed to the Robertson Street entrance.[1] Much of the interior finish has been damaged due to damp ingress (both from the roof which has now been repaired, and leaking/insufficient number of gutters and downpipes). Fund-raising is continuing, both by means of 'sponsorship' of individual building elements and on-going events within the building. More information on this is available at His Place Church Website. 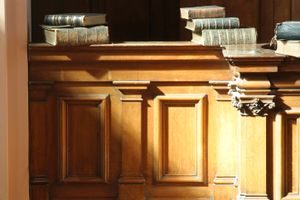 Bibles On Pulpit - His Place church 2019

The use of the venue as a performing arts centre has grown year-on-year, in part due to the excellent accoustics by nature of the horseshoe shaped auditorium. All types of events are held, from rock/pop concerts to orchestral performances to opera. In addition, the venue provides well appointed facilities for lectures etc. Current events at the theatre can be found at Opus Theatre Website

A train carrying a excursion of about 4-500 members of the Hastings and St Leonards Pleasant Sunday Afternoon Association (PSA) in connection with the church to Hampton Court Palace on the 20th of June 1900 skidded on wet rails when arriving at the destination stop. This resulted in 40-60 passengers being injured. All of them were however able to continue their visit to the palace, albeit many sporting bandaged heads etc.[12]

A co-opted member of council elected by his peers on the council, second in authority to the Mayor.