Some references say that the space occupied by Hastings Castle was twice as large as its current size, the southern portion having been lost to coastal erosion[1], whereas others claim this wall would not have been needed due to the sheer cliffs[2]. In 1170-80 a stone keep was constructed, all evidence of this has been lost and now little more than the curtain walls and the remains of two of the gatehouses and bastions are still present.[1]. Alice, Countess of Eu ( - 1248) is the last known Norman occupant. Very little history exists of it having been used as a military base.[1]

The exact date of construction is lost in history, with some sources saying that the castle was already in a dilapidated state at the time of the Norman Invasion.[3]
It is, however certain that even prior to the 1066 invasion, a fortification existed in the vicinity;
This is evidenced in the Chronicles of Dover Monastery, printed in Leland's Collectanea, which says that—“When Arviragus threw off the Roman yoke, it is likely he fortified those places, which were most convenient for their invasion; viz. Richborough, Walmer, Dover, and Hastings.” Bishop Lyttleton also, in his notice of the Churches of Hastings, recorded in the Library of the Antiquarian Society, conjectures the Castle, the ruins of which he states to be “on the summit of a vast Rock, with the appearance of great antiquity,” to have been originally a Roman fortress, as a defence against the invasion of Pirates.[4]

Moss in his guide suggests that the cement used to bind the cobbles used in the construction to be similar to Roman cement in areas, possibly suggesting parts date back to Roman England[5].

A towered gateway, with a portcullis and semi-circular tower combined with a deep ditch protects the east side of the castle[2]. To the south and southwest, as stated above, there may have been a wall or the cliff of approximately 150 feet in height[6] served as defence to that quadrant. On the north west, there is a wall with no openings. A sally port and two towers were on the west side.[2], one square, the other circular. The latter of the towers is in-line with the chancel arch of the chapel and exhibits herring-bone stonework.[7]. The square tower, set slightly to the south had splayed openings and there was the remains of a sally-port.[7] A number of loopholes existed in the wall at this point.

During 1229, the Dean and Canons of Hastings issued a petition to the King in order to repair the walls of the Castle to secure their chapel, which they stated to be " Sita infra Claustrum , predictum: quod per frequentes inundationes maris pro majore parte, devastatur."[8] This the King is stated to have granted, giving them liberty to enclose the Castle with walls. Permission was also granted to build houses; they would appear to have taken advantage of this, and to have abandoned the old chapel, and reconstructed the Castle Chapel, becoming known as St. Marys in the Castle.[9]

A further request was made in 1331, when a petition was sent to the King asking for permission to complete the walls of the castle and place buildings inside; the reason for this being given as[10]

The dean and chapter of the free chapel of Hastings castle request remedy because they are constantly troubled by notorious malefactors from Winchelsea and Hastings who have attacked, wounded, imprisoned and held to ransom their vicars and ministers and stolen from their chapel. 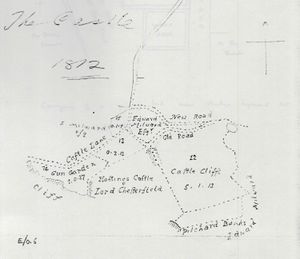 Sketch from J. Manwaring Baines notes showing environs and ownership of lands surrounding the castle during 1812

Among the various transfers of land ownership, we find the following;
"...work, it became forfeited to the Crown, in the reign of Henry III. By this monarch it was given to his son, afterwards Edward I., and passed after wards to Peter of Savoy, and to John de Dreuw, Earl of Richmond, son to the Duke of Bretagne, on certain ex changes of land, pertaining to the Manor or Honour of Richmond, which Peter of Savoy had made over, for the use of the Prince; long after whom, it is stated, the Dukes of Bretagne lost their lands in England, by adhering to France.[11] In 1372, Richard II., Hastings was given to his uncle John of Gaunt, who was made Earl of Richmond. On the death of John of Gaunt, the Castle was granted by his son Henry IV. ... on the deposition of Richard II. ... to the Earl of Westmoreland, and the reversion to Sir John Pelham. By Sir John Pelham it was conveyed to Sir Thomas Hoo, of Hoo in Bedfordshire, to whom was given the title of Baron of Hastings, by King Henry VI. ... for his valour and conduct, in suppressing a rebellion in the Kingdom, during that reign, respecting some Town in Normandy, and who is stated also to have merited highly of Henry, in his wars with France."[12]

In 1822, some workmen cutting back the cliff found two coins, a shilling dating to Elizabeth I and a penny of Henry II[4]

In 1824 the Earl of Chichester engaged an architect (Mr Key) to undertake some excavations. Starting at the steps in the western tower, and digging downwards[7] revealed the Chapel floor and its arch.[2]. During these same excavations a number of inhumations were discovered in stone coffins[2]; the largest of which measured seven feet in length and contained a complete skeleton, the bones measuring six feet in total. A further coffin contained the remains of a child and another one, as large as the first, although the contents were not described[13]. The chapel walls and chancel arch were built out of the ruins uncovered by this excavation.[7]

The bases of the pillars were revealed to have leaves springing up out of the mouldings in the angles of the plinths. Traces of a sedilia were found in a side wall, together with the font and piscina which were placed in the nave[7]

Continuing the excavations to the north side of the castle uncovered a gateway approximately nine feet wide by nineteen deep. This is presumed to have been the original keep-entrance to the castle and the groove for the portcullis was visible. This provided an entrance over the gulley between the castle and Ladies Parlour. Further excavation outside the line of the walls revealed two semi-circular towers either side of the gate-house and another tower, again semi-circular in plan towards the sea-facing cliff.[7]

A spur, ancient keys, part of a bridle bit, a chain bridle and a lamp-suspender were among the relics found during the excavations.[7]

Stonework belonging to two coffins were found in the side aisle of the chapel with two further coffins being found; one containing the skeleton of a child, the other of an adult male with an extra skull and a few bones placed at his feet. These were all buried some two feet below the chapel floor and had plain slabs of stone as their covers.The skeletons were in a reasonable state of preservation and the skulls had teeth which were regular and in a sound condition[7]

The castle had an extension to the promontory upon which it stood to the seaward side. This was known as the Gun Garden and frequently had a flag flown from the mound thereon, together with being used for ceremonial firings of the town cannons. This was levelled around 1892 to construct Breeds Place and the lower reaches of Castle Hill Road.

A visitor's guide published in the Hastings & St Leonards Observer during 1869 states the following[14]:

Castle Gardens, on Hastings heights, and encircled by those walls that have withstood " thousand years the battle and the breeze." The ruins stand at a height of feet. In the interior was excavated, the ruins of the chapel, after being buried for some centuries, were again brought to light, and its arch, which is now the ornament of the castle, rose from its ruins. Admission any day, except Sundays, on the payment of a small sum.

The church within the castle probably existed at the hill-top prior to the invasion by William the Conqueror, but was rebuilt after the Conquest to include a Grammar School and a Singing School. The church is believed to have been used long after the castle fell into dereliction.[1]. The lower portions of the church walls are still in existence with a length of some 110 feet[2], together with the late twelfth century tower arch[1] and show some evidence of fire[2].

In 1958, a Grammar School pupil, Peter O'Hara was exploring the sandstone cliffs in the area of the castle and noticed a brown object protruding out of the sand. Some excavation revealed it to be a cannon-ball approximately 3½ inches in diameter and weighing five pounds. On taking the find to the Hastings Museum, he was informed that it was most-likely fired from a vessel off Hastings due to the location in which it was found[15].