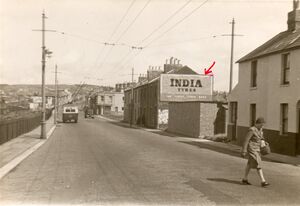 Priory Road in 1952 prior to Halton Clearance

R. G. Roberts suggests that the Ton (Tūn in Old English) portion of the name implies an enclosed piece of land, manor or hamlet[1]. alternatively, Cousins argues that during the reign of Queen Elizabeth the 1st, the district was called "Haltoaun". [2] An alternative name is suggested by Manwaring Baines as being 'The Haltone' during the Elizabethan period when the field was possibly named after William De Haltun[3]

During the Elizabethan period, Halton was divided into two parallel fields oriented NW to SE[4] Evidence of these the boundaries of 'The Gulphs and 'The Shelves's still exist to this day, being the present day footpath from Priory Road to Old London Road, other boundaries existing with the Gulphs being in Halton Place and Robertsons Hill. The Shelves are the land running down from Priory Road to the railway line. The northern most part of Halton was known as 'Gallows Fields'.

During the 18th Century, much of the land was packaged into smaller areas of land and we get names such as Lodge Field, Middle Field, Five Gates, Pit Field(previously the northern field of the Haltone), Kiln Field, Kiln Piece and Road Field (previously the Gulphs)[4]

In 1669, there is record of Francis Frank selling Gallows Field to Samuel Crede, Samuel in turn selling the land in 1721[4] to John Benbrigg (hence the name of Bembrook Farm). Benbrigg then sold the land to John Collier (1685-1760) in 1729.[5] At the time of the settlement of Collier's estate, a map shows Collier's lands to include Kiln Field, Kiln Piece & Road Field, whilst Francis Cruttenden owned Lodge Field, Middle Field, Five Gates and Pit field[4]. The Shelves were then known to be school land. The Collier map also reveals the first buildings on the land and the appearances of various footpaths.

The threat of Napoleonic invasion saw 30 acres of land in the area being purchased by the Government at a cost of £3,000 in 1797 - this being the Barrack Ground. This stationing of troops also saw two public houses being opened within the space of 3 years, these being the Canteen in 1807 and the Fortune of War

Halton House was constructed on land purchased in 1824 by the Reverend George Stonestreet Griffin comprising 6 acres.

The parish of St Clements Halton originated in 1839 and although the church is no more, the graveyard still exists alongside Egremont Place, this parish incorporated land originally named 'The Gulphs and 'The Shelves'[4].

There were a number of twittens running throughout the area, together with a series of streets that were swept away during the slum clearances and replaced with the flats now occupying the area. Some of these properties were reconstructed by the Hastings Cottage Improvement Society; ten on Lennox Street and three on Priory Road using concrete to provide a total of five rooms per dwelling, giving three bedrooms during 1874[6] 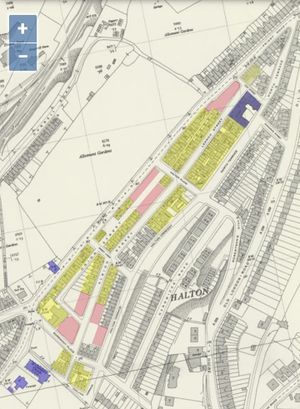 Map of Halton Clearances.
Pink : Demolition caused by bombing during WW2.
Yellow : Demolition as part of the Slum Clearances in the late 1950s.
Blue : Demolition in the early 1970's.
Thanks to Leigh Kennedy.

Halton underwent a major re-development post-WW2 commencing in the 1950s to 1970s where whole streets were swept away, partly as a result of Bomb Damage but mainly as a result of the Slum Clearances.

The following 25 pages are in this category, out of 25 total.