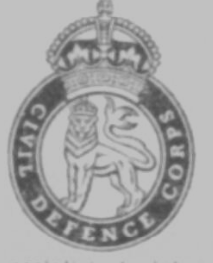 The Civil Defence Corps was a volunteer organisation charged with damage control together with rescue of any casualties arising from an attack during the Cold War. The Corps was founded in Hastings following the publication of the following letter from the then Mayor J. D. Cooper in the Hastings & St Leonards Observer of the 12th of November 1949[1] :-

Under the provisions of the Civil Defence Act, 1948, and the Regulations made or to be made thereunder, the Council are responsible for recruiting and organising a local division of the Civil Defence Corps for dealing with the consequences of any hostile attack on the town. Steps have also to be taken to recruit volunteers in the Special Constabulary, the Auxiliary Fire Service and in the National Hospital Service Reserve (trained and auxiliary members).

The establishment of these organisations does not mean that war is likely. It is a commonsense method of ensuring that with the Navy, Army and Air Force, in the unhappy event of future war, we shall have available an organised body of trained men and women as an essential "Fourth Arm" of our national defences.

The recruiting campaign for volunteer part-time service in the various branches of Civil Defence will be opened on a national scale on November 14, and appeals for volunteers will be made over the wireless and in the national Press.

Enrolment of volunteers for the Hastings Division of the Civil Defence Corps will commence immediately afterwards and will, until further notice, be carried out at the Town Hall between 9:15 a.m. and 7:30 p.m. daily (Saturdays until 1 p.m.). Forms of enrolment will be available on and after November 15.

Enrolment of Fire Service Auxiliaries will normally take place at the Fire Stations at Marina and , and of the Special Constabulary at the Central Police Station. Trained members of the National Hospital Service Reserve can enrol only at specified hospitals, about which the St. John Ambulance Brigade and the British Red Cross, who will be represented at the Town Hall Recruiting Centre, will provide particulars. With regard to auxiliary members of this reserve, facilities are being provided for enrolment forms to be made available and received at the Town Hall.

May I appeal to all residents who can, to offer their services in whatever voluntary capacity they desire? Every offer of service will be fully appreciated. By volunteering for these very important tasks people of Hastings for service to their families, their town and their country, responsibilities which Hastings has, in the past, always accepted and borne in full measure with credible results.