With construction commencing in 1833 with a single dwelling owned by a Mr. Troup near the middle of the square (no longer standing)[1], The road was dedicated in 1849[2]. Warrior Square was was finished in 1864[3] on the site of the Warrior Field with the first building starting construction on the 13th July 1844[4], and contemporary guide books described it with an alternative name ‘Belgravia’. Whiteman’s Guide to Hastings, St Leonards and the Neighbourhood, 1869, noted “Warrior Square, At once the abode of quiet and elegance, being composed of the finest houses in the borough. The extensive gardens in the centre are very tastefully laid out. The Hastings and St. Leonards Horticultural Society holds its annual meetings in these gardens”. The gardens in the centre were completed over a decade earlier in 1852.

Until 1931, the upper portion of the gardens was not open to the public, being subscription gardens prior to this.[5] 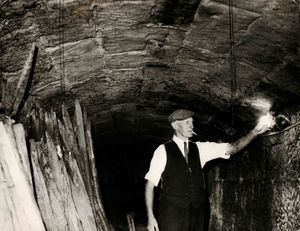 Captioned: "A flag stoned tunnel of great age which runs under the main road and from Warrior Square Putting Green and Gardens. Roman coins of the year of the Emperor Commodius foud in the square in 1855 in Jan; Used by the coaches; Charlie Eldridge Parks & Gardens Foreman"

An act of Parliament, dated June 14th 1827, empowered trustees to deal with the lands of the Eversfield Estate, and enacted that it shall be lawful for the trustees to set out part of the lands for square, lawns, etc “for the use and convenience of the occupiers of the houses and other buildings” and this provided for the setting-out of Warrior Square Gardens which opened to the public in 1852 with a band playing three times a week.

A now-sealed tunnel lined with flag-stones was cut under the road from the lower gardens under the main road. Brett describes a tunnel that was constructed from the first house built in the square, connecting both parts of the gardens to the house[1].

The lower gardens were opened to the general public when the land was acquired by the Borough Council in 1920 with the remaining, uppermost rose garden falling into public ownership in 1930.[6]