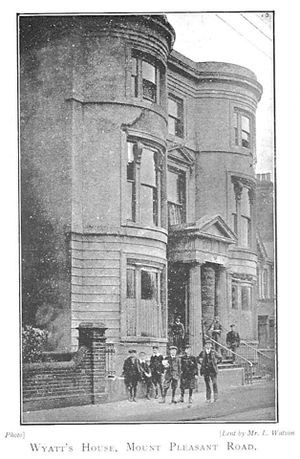 Originally the farm house to Mount Pleasant Farm, the house was described by Powell (most likely an earlier building) as a 'good farm house, occupied by Mr Tutt. It has commanding views of the surrounding valleys, the castle, priory and sea. The accommodations consist of two sitting rooms and five beds'[1] The site is between the Hughenden Road and Quarry Road junctions on today's Mount Pleasant Road. By 1867, the house was occupied by Mr. Henry Wyatt's Family[2], and was described as a white house with bow-fronted windows[3].

Mr. Wyatt obviously realised that his house encompassed some valuable building lands within the property boundaries, for as early as 1874, we find advertisements for sale of land to the rear - this now being Hughenden Road[4]

The contents of the property went up for sale by auction in 1897[5] following the death of Mrs. Wyatt - her husband having died on the 30th of March 1874[6], with the property itself being put up for sale in 1897, described as a commodious detached residence with a frontage onto Mount Pleasant Road of 61 feet and a total depth of 153 feet[7] - this revealing that the property boundary at that time extended as far as Hughenden Road - roughly where numbers 64 through to 76. Soon after 1901, the house no longer exists, having become incorporated into the properties on the north side of Mount Pleasant Road, the house having originally stood in the vicinity of numbers 45 to 55 (although the house was numbered 45 on the 1901 plans with a gap in numbering to the next house to the east).[8]