Although commonly associated with the West Hill windmills, this mill stood some distance removed from the group of mills at that location.
Baines describes French's mill thus[1]:-

The building of this windmill can be dated almost exactly from the Poor Rate books of the parish of St Mary In The Castle.

The old Pest House stood well away from the rest of the town as was indeed desirable, on the east side of Croft Road where it joins Priory Road, and the site is now covered by the Priory Road Schools[Notes 1]. The Tile Kiln Plot was immediately across the road on the west, and it was here that John French erected his mill, which to judge from the representation of it in Powell's Guide must have been the old fashioned postmill.

French is an ancient name in Hastings. An Adam Frensh, once Bailiff, appears as executor of a will in 1416, while another Richard French was bailiff in 1586, named as a Jurat in the charter granted by Queen Elizabeth, and later mayor in 1598, 1599 and 1606.

At the coronation in 1603 he was one of the queen's canopy—bearers, and finally died in 1609 at the age of 88. A contemporary of his, possibly his son, was Richard French, a baker in the parish of St. Clements, who was repeatedly fined for short weight between 1609 and 1620. After his death in 1622, his "poore sonne Richard" was bound apprentice to a fisherman by the Overseers of the Poor.

A John French paid his scot in Hastings as a miller from 1781. to 1786 at the rate of one shilling. This may have been the John French, described as of Fairlight, who married Margaret Andrews at St Clements on Aug.16th, 1767.

The John French, who built this mill, continued to pay his 4/9½ or 4/10 poor rate for it until Dec.9th, 1819. His mill was popularly known as French's, and he gave his name to the large pond nearby, which had been known as the Pest House Pond but was now very popular for skating parties and reputed to contain good fish.

Brett states that the mill was rendered sweepless by the great wind of Feb.19, 1808 and was once wrecked by a severe gale, but as he also says it was built about 1808, he may have confused it with repair work. 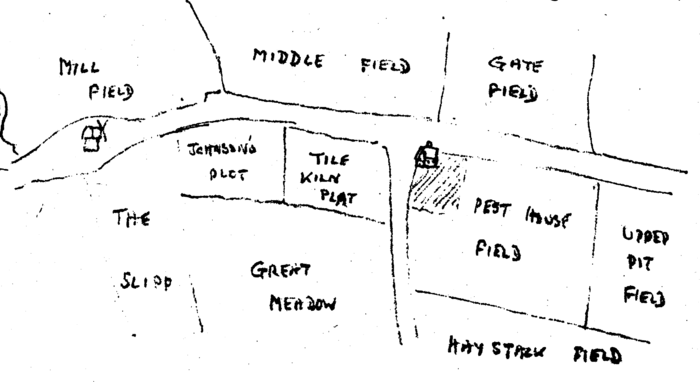 The 1767 John Shorter map gives the following field names near to French's Mill:-