Historical Hastings Wiki
You have a new message (last change).

"In 1943 I was L.A.C.W. Joan Howell, a 27 year old parachute packer in the WAAF. On this particular day I was home on leave visiting my mother who lived in a bungalow on The Ridge overlooking Hastings. At that stage of the war the RAF used to fly standing patrols over the south coast towns to combat the growing menace of German tip and run raiders. On regular duty over Hastings was a pair of Spitfires that came to be known by the locals as ‘Gert and Daisy’. Hearing the noise of low flying aircraft, I assumed it was the usual patrol and opened the front door to look across the valley towards Hastings. Flying towards me along the line of The Ridge, just above rooftop height, there were indeed two aircraft, but I realised instantly that instead of RAF roundels, these planes had black crosses on their sides, and from my aircraft recognition training, I identified them as Focke-Wulf 190s. As they came level with the house, they wheeled away and dived towards ." 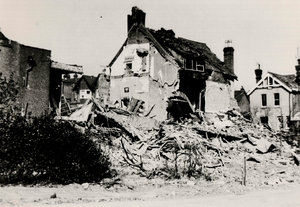 "I ran back into the house screaming to my mother and sister to take cover, which, in this sort of emergency, usually consisted of diving under the kitchen table. Several waves of enemy aircraft skimmed the roof of the house closely followed by the sound of cannon fire and loud explosions to the south. The aircraft were attacking in what would prove to be the most devastating air raid on Hastings of the entire war. In slightly less than ten minutes the Luftwaffe killed 38 people, seriously wounded a similar number and slightly injured 51. Whole rows of houses and shops were flattened, and witnesses were shocked and confused about exactly what had happened, although many of the survivors told of a lone soldier who had put up some heroic resistance. It seems that he was driving an army truck with a light anti-aircraft gun mounted on the back. The raiders struck as he was passing through the road junction at . He stopped in the middle of the crossroads, climbed into the back of his lorry, loaded his weapon and opened fire on the enemy. According to witnesses, successive waves of aircraft swept across the junction bombing and strafing. Despite explosions rocking his vehicle and a hail of shrapnel falling all around he continued to engage the enemy. When the raid was over he closed down his unit and drove off. Despite repeated attempts by the people of Silver Hill to find and thank this hero, he has never been seen or heard of since." 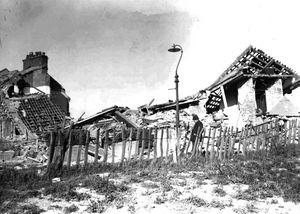 "After the all clear had sounded, and everyone had got their breath back, my sister and I walked down Hillside Road towards Silver Hill. Columns of black smoke arose from the stricken community and the air was filled with the sound of ambulance and fire engine bells. Piles of smoking rubble had replaced the row of shops, one of which being where I had worked before I joined the WAAFs. Shocked by the nightmare that surrounded me, I stood amongst the broken buildings not sure of where ‘my’ sweetshop had been. With the knowledge slowly dawning that Mr Gower and his son, my ex-employers were buried here somewhere. I remember, my sister took out her handkerchief and tried to clean my face, which was streaked with dirt and tears. As we stood there, feathers were falling all around us like snow."

"It was to be another two days before the bodies of my friends were recovered." [1]