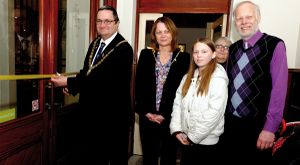 His Place Church is a Non-Denominational Charismatic Church established in 1984, when it was a house church. In 1987, the church expanded and met in a community centre, before establishing premises in Duke Road.

On the 1st of November 2013, having outgrown the Duke Road premises, they took up occupancy of Robertson Street Congregational Church, opening a cafe in the basement and utilising the space as a theatre when not used for services.[1]

The church is led by the Rev. Chris Sears MBE who received the honour in 2009 for his work among the town’s homeless.[2][3] Chris is an ex computer programmer who worked at Ashdown House.[4]

The basement of the former URC in Robertson Street has been developed as an art centre, a cafe and as home to a range of community groups, in particular Hastings Safe Space, an NHS-programmed refuge for young people. They have also opened up the main auditorium and upper balcony as a concert venue for Opus Theatre, an enterprise that promotes musical and other arts events.[3]