Hastings Bathing Pool was an open air lido situated behind Sea Road and Seaside Road. Opening in March 1933, it had huge popularity initially, but fell into decline post WW2 and eventually closed, being demolished in 1993. The site now holds underground storage tanks associated with the Southern Water Storm Drain project.

From the air, the design resembled a Greek or Roman amphitheatre, with curved, stepped terracing for spectators on one side and a curved deck for sunbathing on the other. Overall though, the style was functional rather than classical. There were no Doric pillars or classical references. It represented a transitional phase in lido design. At the centre of the pool was an impressive array of diving boards up to 10 metres high, constructed from blocks of concrete. [1] 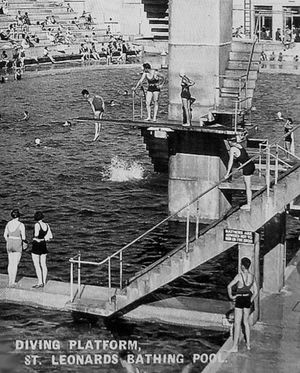 On the 27 March 1933, the Bathing Pool was opened by Sir Humphry Rolleston G.C.V.O in front of 5,000 spectators[2]. It was constructed by Sidney Little for the 1933 Empire Games. At the time of completion, it was one of the largest swimming pools in Europe, measuring 330 feet by 90 feet with a capacity of 800,000 gallons of water and seating for 2500 people.[3] The pool graduated in depth from 2 ft to 15 ft. under the fine International diving stage.[2]== Events == The Bathing Pool staged many National Swimming and Diving Championships, and thus hosted many an International star.[2]Adding weight behind this, Mr T Mather, Empire Highboard Champion 1934 was the manager of the pool. New ways of diving training were introduced, including belts and trampolining. Winifred Gibson of ASA Author fame held her excercise classes on the decks of the pool. In addition, many fashion and beauty shows were held in the pool arena.[2] During 1952, the British Olympic Swimming team utilised the pool for training[4]== WW2 Usage == It was known to have been used as a storage area for gas masks and other decontamination supplies during WW2.

Despite the diversity of attractions, the pool was not financially viable in the long term, and it closed in 1959.There were a number of attempts to lease the facility out to third-parties during 1954, but to no avail.[5]The following year, 1960 it passed into the hands of Alderman Sid Withers, who converted it into a down-market holiday camp.[3] It finally closed in 1986 and was demolished in May 1993, some 60 years after it first opened.

A co-opted member of council elected by his peers on the council, second in authority to the Mayor.