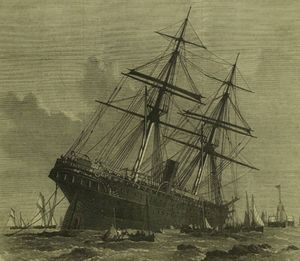 Image from the Illustrated London News

The iron steam-ship Baltimore, of the North German Lloyd’s line, trading between Bremen and America, was collided with by the Spanish steamer, the Lorenzo Semprun, in the Channel around nine miles off Hastings, just after midnight on the 16th of May 1872. The officer in command of the Baltimore, Mr. Deetjen, finding that the collision had made a large hole in the starboard bow of the ship, turned her head towards the shore, guided by lights on Marine Parade. At the same time he fired signal-rockets, which were seen by the coastguard. The ship took in water fast, and gradually sank by the bow, so that she could not have been kept afloat ten minutes longer had she not been run aground within a third of a mile of Marine Parade. There were 130 passengers on board and a crew of eighty seamen, They were safely landed in the boats, with the aid of the coastguard men, at first under Mr. Attersoll, till Captain Garforth, commanding officer of the station, arrived to direct this good work. The cabin passengers were received at the Royal Marine Hotel; the others, with the crew, found shelter in the Market Hall, by the assistance of Mr. Moulton, local secretary of the Shipwrecked Mariners' Society. Many persons went out to see the ship during the next two or three days. She lay on the sands opposite the Government House coastguard station, in 8 ft. of water at low tide, with her stern, the higher part, turned towards the shore.

The hole in her bow, about 5 ft. square, could be plainly seen, and workmen were set to repair it by putting in new iron plates. The Baltimore was a screw-steamer of 2500 tons burden, with engines of 700-horse power and a length of nearly 350 ft. She was on her way from America to Bremen, laden with tobacco, molasses, and lard, Captain Fisher had died on the voyage, and Mr. Deetjen was in command. She had put in at Southampton, and landed her English passengers, on the Wednesday, leaving Southampton at four o'clock that afternoon. The Spanish steamer, on her way from Aalsund to Santander with a cargo of fish, received great damage from the collision, but was enabled to reach Southampton on the Thursday afternoon, The Baltimore was safely got off the beach at Hastings, just over a week later on the following Sunday, and was towed to Southampton.