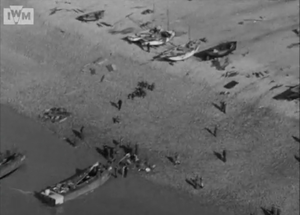 On the 3rd/4th of June 1942, commandos carried out 'Operation Bristle' - a raid on a German radar site at St. Cecily Plage, Le Touquet. Troops from 6 Commando were defeated by the strong German defences and harried by enemy fighter aircraft causing damage to three of the raiding force's vessels. One Commando and two naval personnel were killed and another 19 injured. The arrival of Royal Air Force prevented further damage and losses. The convoy was escorted back to Hastings by an Anson airplane which captured cine film of the troops return[1]; this film hosted by the Imperial War Museum gives an excellent view of the coastal defences around the harbour and stade.