Hastings Station was operated by both the South Eastern Railway (SER) and the London, Brighton and South Coast Railway (LBSCR) leading to bitter rivalry between those companies.

The first train arrived at Hastings station in 1851. The station was originally V-shaped allowing the two railway companies to have separate platforms and booking areas: one side for SER trains to pass through and the other as a terminal for LBSCR services and was known for a time as 'Hastings Priory Station'[1]. 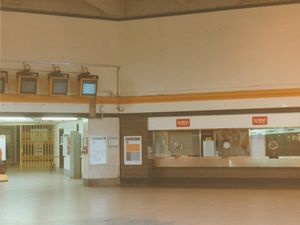 Interior of Hastings Station prior to 2004 rebuild, showing ticket offices and walkway to platforms

In 1931 the whole station was reconstructed in a neo-Georgian style by the architect James Robb Scott and only the goods shed remained unchanged.[2] All trains now ran through the two new island platforms and a huge central octagonal booking hall with a buffet and bar was the reception for passengers. The main entrance was beneath a single, large lunette window – a motif that had become an internationally-recognised symbol for the railway station at the turn of the twentieth century.[3]. The rebuilt station opened on the 6th of July 1931.

The station building was again re-built in 2004, with the neo-Georgian booking hall demolished and replaced with a modernist building with extensive glazing. The southernmost loop platform has been curtailed into an Ashford facing bay.[2] The station forecourt too was modernised with space for the new Station Plaza buildings and featuring a fishing boat on a traffic island as the centrepiece. The fishing boat arrived by road on the morning of Sunday 20th August 2006, being representative of Hastings’ maritime heritage. All that remains of the 1931 rebuild is the signal box and prefabricated concrete platforms, the canopies and footbridge over the tracks and platforms having been rebuilt.