The gunpowder industry was established in Sussex in the third quarter of the 17th century and continued for two hundred years. Several of the mills were built on the sites of former iron works. There were five mills on the River Asten near Battle and two on the River Brede, at Sedlescombe and near the village of Brede. The Sussex mills were renowned for their high quality powder, known as Battle powder, and a special dispensation was granted in the 1772 Explosives Act to allow the continued use of pestle mills, which were in general prohibited, for this manufacture. Steam power was introduced at an early date at Battle, possibly due to problems with water supply. There is also evidence that wind power may have been used, in the form of a blue and white printed plate depicting 'Powder Mill, Hastings'

For over two centuries this area was the prime source of gunpowder for the British army and the Royal Navy. Sussex gunpowder would have accompanied Marlborough at Blenheim (1704), Wolfe at Quebec (1759), Clive at Plassey in India (1757), Nelson at Trafalgar (1805) and Wellington at Waterloo (1815) and possibly a further 46 campaigns, including the Crimea, Indian Mutiny, and the Abyssinian Campaign against Emperor Theodore.

The processes in the manufacture of gun powder were briefly as follows:

The grinding or amalgamating was the first process after the preparation of "the charge," viz., the three ingredients, saltpetre, charcoal and sulphur, and from 80 to 100 lbs. of this mixture, suitably moistened to avoid sparks, in a layer two or three inches thick was placed under each pair of stone "runners" in a pan of about nine feet diameter, the stones weighing six or seven tons each, rolling round like two huge waggon wheels in this pan for about ten hours on this dangerous mixture. The buildings in which this grinding was done were always termed " The Mills."

The gunpowder was then taken to the "presses," where it was placed layer upon layer until about 25 cwt. was in position, when hydraulic pressure of 400 tons to the square inch, was applied by steam power, the powder then resembling hard tile or slate.

It was next conveyed to the "Corning Houses" where the hard cakes were broken up and passed through a sieve (or corned) with the size of grain required, from the coarsest blasting powder to the fine-grained sporting powder.

The gunpowder then had a dull brownish appearance, and at this stage was taken to the "Glazing Houses" where it was placed in cylinders similar to barrels, which slowly revolved in a horizontal position, this motion in time producing the well-known black and shining appearance of gunpowder.

Two mills with four pairs of "runner" stones were under the bay of the pond at the "House" mills; these were always known as the Big Mills, because the largest runner stones were here.

This waterway still exists and passes under Powdermill House, and is large enough for a man to walk up in a stooping position. Mr Morgan stated that one of the 'powder men would occasionally pass through it with lantern and a large fork to catch eels'. The large stones from these mills were removed to Dartford in 1874, viz., when the powder making ceased at Battle.

Under the pond bay was a mill with two pairs of stones or runners; these stones laid on the site. in view, until a few years ago, when Sir Augustus Webster, the owner of Battle Abbey estate, had this pond cleared of mud by a numerous gang of men, and the vast accumulation of mud wheeled from the pond over the bay completely enveloped these stones, which now lay buried several feet deep under this consolidated mud.

History of Gun Powder Manufacture in the area[2][edit] 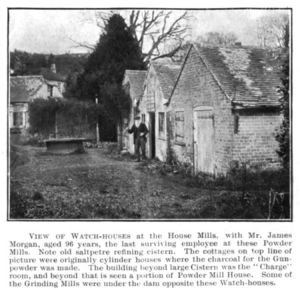 The first gunpowder mill in Battle was built in 1676 when John Hammond was granted permission to build a mill on land owned by the Abbey. A gunpowder works was located in Powdermill Lane – the remains of which have been converted into a hotel.

The gunpowder works was one of five on the river Asten. In 1722 Daniel Defoe described the town as being "remarkable for little now, but for making the finest gun-powder, and the best perhaps in Europe".

Baines suggests in his Index Book that Harvey's Powdermills were destroyed by 5 tons of powder between 1761-3 [5], and that an explosion at Charles Lawrence's mill was heard in Hastings on the 19th of June 1837[6].

The Duke of Cleveland refused to renew the licence in 1847 after many mishaps, including one occasion in 1798 on which more than 15 tonnes of gunpowder were left in the oven for too long and exploded necessitating the rebuilding of the main building. During the six year period between 1811 and 1817 there were recorded at least six accidental detonations at the mills[7]

The site at what is now the Powdermills Hotel contained the proprietor's residence and various process buildings, which probably included the single-storey ranges at the rear.

The apparent concentration of processes in one large structure is unique in the gunpowder industry, the buildings of which were usually highly dispersed in single-process structures.

It is not clear how the house is related to the water-powered activities of the works which would have been located below the mill pond.[8] 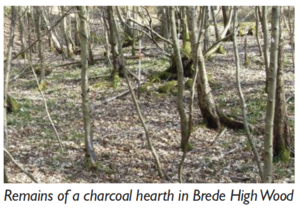 Located on the River Brede, 2 km west-north-west of the village of Brede. The mills were converted from an iron works, which closed down in 1766, and they operated from 1770 to 1825.

Brede High was an important place for producing armaments which were exported to the Continent as well as being used by the English Navy.The site of the furnace now lies beneath the dam of the reservoir and was probably built on the site of a medieval corn mill .The furnace was built in 1578 by a consortium of iron masters from Tonbridge in Kent.As well as casting the great guns (the 32 pounders at 9½ feet long), Brede Furnace was also known for its cast iron fire backs.[9]

The ponds were then drained for hop gardens and the buildings were demolished [10]. Only an incorporating millstone remains at the end of the bay of Powdermill Reservoir [11].

Brede was the scene of three mighty explosions in March 1808 that were heard in Lewes, some twenty-five miles distant. A graphic report was published on the death of two workmen and a child: “One of the men named Sinden had his head and limbs separated from his body and carried into a neighbouring wood wherein they were collected and placed together and presented a shocking spectacle. The child was killed in an adjacent cottage.” [12]

Part of a building survives [15]. The site was previously used for ironworking [16].

The site at Peppering-Eye is the earliest site in the group dating to 1676. Edge runners in the garden of a house are visible from the footbridge crossing the stream.[17].

At the rear of the Bridge Garage there used to be a water mill, which ground corn until 1750. It was then used to make gunpowder.[18]

1676 Peppering-Eye leased to John Hammond of Battle with permission to erect a powder mill.

Until early Victorian times, the gunpowder kegs were taken to the port of Rye to be shipped to wherever British forces needed this vital component of military power at the time.

In the Crimean War (1854-1856), 1,300 barrels of Battle gunpowder were transported by road to Tonbridge under the supervision of James Morgan, where it was loaded onto barges and conveyed via the Medway and Thames to magazines at Erith. The barrels would be loaded with saltpeter for the return journey, saltpeter being an ingredient in the making of gunpowder, although it is reputed that on occasion the barrels would be filled with contraband.

The barrels at Erith would be loaded onto ships in the Thames that then undertook the long voyage to the Black Sea and the Crimea, traversing the Mediterranean and passing Istanbul en route. It is entirely possible that Sussex gunpowder was present at the Charge of the Light Brigade! [22]