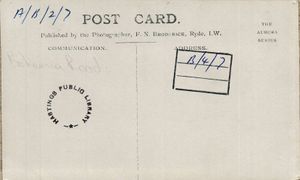 Frederick Nutt Broderick was born in Kennington London in 1854, the son of an engraver and printer. His family moved to Ryde in the Isle of Wight when he was a small child.

In later years he established a photographic business in Ryde and in the 1900s he travelled along the south coast of England taking photographs of seaside towns which he published as picture postcards. His views of Hastings were taken between 1905 and 1907.

The collection of Hastings photographs was known as the “Aurora” series, named after his eldest daughter, Aurora, who acted as his assistant. His house in Ryde was also named Aurora Villa. It is suspected that his daughter features in a number of the photographs.

Broderick died in November 1913 and was buried at Ryde Cemetery. His wife, Emily, continued to run the business for a few years.[1]

Works stored on this wiki[edit]