This large hotel located at 32 Eversfield Place opened on the 26th of October, 1876[1] and was run by a company set up for that purpose, The Alexandra Hotel Company Ltd. The hotel took its name from Princess Alexandra, the Princess of Wales who had also opened Alexandra Park in 1882. Reporting of an Annual Meeting showed the hotel to be facing a difficult climate at the turn of the 20th century and required the hotel to incur extra expenditure to accommodate guests demands. Although the hotel had not previously held events such as dances, it was clear that this was the way forward in hospitality, and the board accepted a proposal to explore running seasonal dances and other events. Marketing itself as a modestly-priced hotel during 1905, it claimed to be a favourite hotel patronised by "Leading families in the Kingdom"[2] 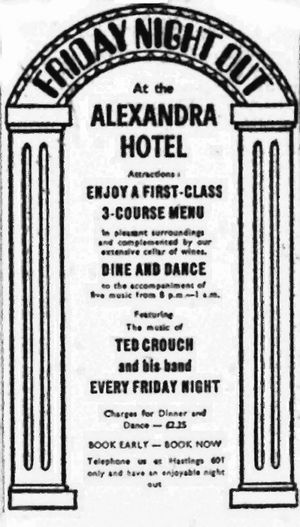 1973 Advert for Ted Crouch and his band

During the 1920s, following the popular "Jazz Age", the hotel ran regular dinner-dances in the hotel's ballroom where patrons could dine and dance to music provided by the Syncopated Orchestra featuring 'Cyril W. Baker' and his drummer 'Gus J. Howell'. Dance classes were also provided throughout the week at the hotel[3], this leading to the formation of the Hastings School of Dancing, based at the hotel, around 1925. Band performances and dinner-dances continued through to at least the early 1970s, when Ted Crouch and his band were the resident orchestra in 1973[4]A 'Buffet Bar' was evidenced as being located in the basement below the main verandah in 1934.A new manager was appointed in 1948, taking over from Major C. F. Swann, when Major J. D. Kerr and his wife arrived from East Grinstead to take over the running of the hotel. Major Kerr was described as having served in the Middle East during 1940 and 1941, being invalided home, where he took up an appointment with the War Office, then running the Dorset Arms Hotel in East Grinstead[5]. By the 1970s, the hotel was under the management of Mr. and Mrs. Jonny and Audrey Amato[6]

The hotel was converted to flats around 1984[7], still bearing the name of 'The Alexandra'.

Unique Property Reference Number. Each building or individual sub-unit of a building has been assigned a UPRN to facilitate searching for planning applications among other functions.