Historical Hastings Wiki
You have a new message (last change). 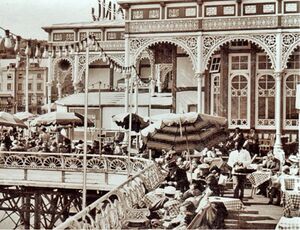 Built between 1888 and 1891, St Leonards Pier (also known as The American Palace Pier whilst under the ownership of an American conglomerate) was opened on the 28th October 1891 by Lady Brassey. It was designed by London engineer Richard St George Moore (he also designed Brighton Palace Pier, and piers at Swanage and Tenby). The construction cost about £30,000 and the pier was 950 feet long.

An attempt to construct the pier took place in the middle of 1872, the St Leonards Pier Company having been set up in 1870 and had gained almost all the necessary legal permissions to construct a pier. The company had still to gain the consent of the St Leonards Commissioners, who owned the esplanade (part of which would have been encompassed by the pier). This was refused, some three weeks before their other permissions to build a pier expired[1]. The Commissioner who proposed the refusal, the Rev J. W. Tottenham, was also a shareholder in the Hastings Pier Company.

In August 1917 a Mr John Henry Gardner moved to St Leonards and took over the pier. He became well known for his generous support for local charities and his attempts to make the pier a success.

But although the St Leonards Pier was an important attraction, it was an ongoing financial failure. Gardner effectively went bust in 1927 and offered the pier to Hastings Council for a mere £9,000. But the Council refused because of the high cost of reconditioning the structure, estimated at £21,000. Supporters of the pier disputed this cost, pointing out that over the previous two years the pavilion had been reroofed and repainted inside, a large sum had been spent on the substructure and the skating rink had been repainted.

Gardner, heavily in debt, continued running the pier until July 1933, when the debenture holders gave up and sold their shares to London brothers David and Philip Lannon. They appointed a man named Arthur Collins as the ‘lessee’, on behalf of a company called Southern Piers Ltd. He renamed the pier as the New Palace Pier in March 1934 and promised it would be reconstructed and brought up-to-date.

Then on 7 July 1934 the national magazine John Bull exposed all the Lannon purchase as an “Astounding Seaside Pier Scandal”. It revealed that all these “notorious people” were shady characters with dubious pasts. Mr Collins, whose real name was Arthur Cohen, was the sole owner and director of Southern Piers, which had only been formed in December 1933, with just £1,000 capital. The Lannons, along with another man and their brother-in-law Cohen, had been involved in setting up a £250,000 business for the purchase of an American talking machine. This deal collapsed, but the Lannon group walked away with large sums of money. They also set up many highly criticised money-lending schemes, one of which had bought the pier.

John Bull concluded: “To give a full list of the ventures which the Lannon Brothers have been associated with would be impossible. Time and again their tangled affairs have been thrashed out in the bankruptcy courts, and hard things have been said of their conduct by officials. … In these circumstances we shall watch the developments of Southern Piers Ltd and the New Palace Pier with interest.”

Despite the scepticism of the John Bull, extensive changes and improvements were made, reflecting the changing trends in holiday making. Numerous well-known dance bands were engaged, and the new attractions ranged from a bridge congress to all-in wrestling. But the Lannons had soon had enough, and in September 1938 their solicitor placed an advertisement in the Hastings Observer saying that the pier was up for auction in London. But it failed to reach its reserve price, with the highest bid being £34,750.

During the Second World War, the pier, like many others, was sectioned off as a defensive measure. It was damaged by bombing and further damaged by a fire in 1940 which resulted in the total loss of the pavilion at the shore end and adjacent structures. The fire broke out at approximately 5:40pm on the 7th of March 1940. The fire was fought by eight fire-engines and it was reported that the fire-crews were in a battle against time - the country still being under war-time blackout precautions - to get the fire extinguished before dusk. In the event, this was accomplished, but too late to save the pavilion structure[2]. In 1951, it suffered further damage by severe gales and was demolished.

During August of 1979, a storm exposed some of the original ironwork of the pier. This was later removed by council contractors[3] 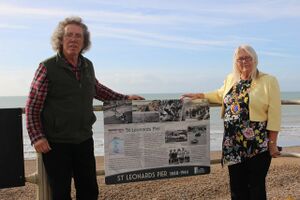 Steve Peak and Judy Rogers with the 2017 information plate.

No visible remains exist of the pier, however in 2017, the Mayor, Judy Rogers and local historian Steve Peak unveiled a display board on the promenade, telling its story in words and pictures[4].