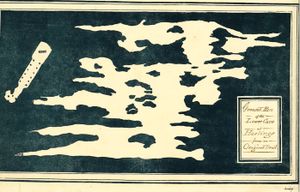 Pre-Goulding map of the caves

St Clements Caves are believed to be partially naturally formed caves and the results of sand mining, together with a degree of commercial exploitation during the late 19th century. Although they are billed as smuggler's caves[1], there is no record of them being used as such. They have, however been used as a hospital, air raid shelter and ballroom/music venue. The actual total extent of the caves is a matter for debate, one guide having put them to extend as far as the which once stood on the West Hill[2]

The caves were (re)discovered in the 1820s when an arbour[3] was being cut out of the sandstone by local grocer, Joseph Golding. In addition, there is a tale of an old man and woman who were evicted from the Work House for misbehaving and who lived at the bottom of the passage known as 'Monks Walk' dating to 1783.

Following the council ownership of the caves circa 1888, gents and ladies toilets were installed during October 1895.

The caves were utilised during WW2 as an Air Raid Shelter with a capacity of 900 persons.
. The local council also utilised a secure area of the caves for safe storage of archive material. 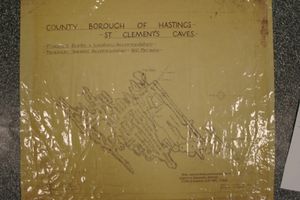 WW2 Plans for use as an air raid shelter

Diana Tanner has the following recollection: "Slept in here during the war, we had 3- high bunk beds.. These were very narrow and my mother used to tie us both in in fear of my falling out and in the morning we were often covered in a fine coating of damp sand.. We stayed each night for just over a year,until a bomb came down so very near and shook the area. My mother panicked ,as everyone did at being buried alive, consequently this was the end of our days staying there.."[4]

Post-war, the caves were used as an entertainments venue with many headline acts such as the Rolling Stones performing in the sandstone cavern known as 'The Ballroom'. Many other functions such as dinner-evenings were also held in the venue. This was in addition to the tours operated by the Borough Council

On 25 March 1989 the St Clements Caves re-opened as the Smugglers Adventure, featuring dozens of life-size figures, push-button tableaux, dramatic lighting to portray how occurred around the area. At the same time, the Ballroom was converted to a gift-shop and the main entrance. A further refit occurred in 1998, still maintaining the theme with a new character created to act as a guide 'Hairy Jack'.

After more renovations in February 2012 the Smugglers Adventure incorporated additional lighting to highlight the caves’ architecture and natural geological formations.

A time capsule is buried in the caves. This was placed there in 1966 (the 900th anniversary year of the Battle of Hastings) and is due to be opened in 2066.